Home > Case Studies > Our Dog Was Stolen from the Car: Case Study

Our Dog Was Stolen from the Car: Case Study 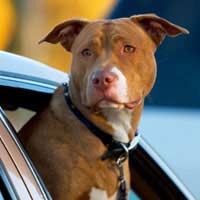 George and Jean Biggs were travelling to Scotland and looking forward to a short break. On the back seat of the car was their cross breed dog Sally. Little did they know that before the day was out there would be many hundreds of people looking for their beloved pet.

Jean said, “We’d pulled into a service station just past Birmingham. After being stuck in a traffic jam we both needed to visit the rest rooms quickly otherwise Sally would not have been left in the car. Usually we stay with the dog and leave the vehicle individually to buy a coffee or visit the bathroom. We were gone no more than ten minutes and as I went back to our car I spotted George frantically calling for Sally and looking around the nearby vehicles. I joined him and he told me that the car door was open and Sally was missing.

Several other car owners joined our search. Luckily I had a photograph of her in my handbag so was able to show it around. A man who had been sweeping the car park came over and told us he’d seen a dog that looked like Sally being lifted into the back of a van. I called the police at once. Sally has the look of a Staffordshire bull terrier but she is a true cross breed and is spayed so she is of no use to anyone. Staff at the service station came to offer their help, everyone was really good, and I was in tears. Sally is on medication and would have become very ill if she did not take her pills by the next day.

A security guard went to check the CCTV cameras while police took notes. All I can think is that the gods were with us and the van was spotted on the tape and the police took note of the registration number. A lorry driver put out word of the theft on his radio and he also rang a local radio station. Soon it seemed that everyone in the Midlands was looking for our dog.

We decided to stay where we were and luckily there was a motel based at the service station. I spent a sleepless night worrying and George went out to drive around looking for her. Our worst fears were that she would be dumped on the motorway. The time ticked by slowly the next day but around lunchtime the police called us to say they had found the van. But where was Sally?

I imagined all sorts of nasty things like police raids and Sally being hurt but at two o’clock the police arrived with a very excited Sally. It seemed the person that took her just wanted to keep her as she resembled his mother’s dog that had died recently and he had given her to the woman as a present. His intentions were well meant but at the end of the day he had broken the law and he did receive a fine. Sally was a celebrity for a while we even visited the radio station to thank everyone for their help. It seems it was a listener that had spotted the van by the description broadcast on air. Sally doesn’t leave our side now and we often think how lucky we were that so many people took time to look out for our girl.”